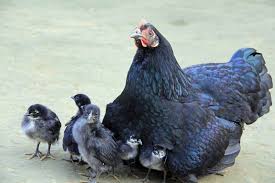 Black Australorp chickens were imported into Australia during the period between 1890 and about 1900. In England during this same period, Black Australorps were being refined for their meat qualities. However, the Australians immediately valued the breed for its egg-laying ability and continued to breed along the lines of the original type.  The end result was an excellent production chicken.

In 1902, during Australia’s winter season, the Hawkesbury Agricultural College held a six-month egg-laying contest between various breeds of chickens. At the Grafton contest in 1923-24 an Australorp hen laid 347 eggs in 365 days. Soon after a hen of the Burns bloodline broke the world record, laying 354 eggs in twelve months. Another hen set a new world record when she laid an amazing 364 eggs in 365 days!

With such great successes in the egg-laying contests, poultrymen worldwide became interested in these chickens. Many were imported into England and America in the early 1920s.