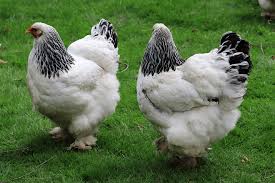 Often referred to as the “King of All Poultry,” the Brahma chicken is appreciated for its great size, strength, and vigor. By 1901 some individual birds were documented to have reached the incredible weights of 17 to 18.25 pounds for cocks.

Brahmas are large chickens with feathers on shanks and toes, pea comb, smooth fitting plumage with dense down in all sections, and broad, wide head with skull projecting over the eyes – termed “beetle brow.”

From the beginning Brahmas have been recognized not only for their unusual appearance and size, but also for their practical qualities. First and foremost Brahmas are found to be extremely hardy chickens. They are also good egg-layers for their size. Considered a superior winter-layer, they produce the bulk of their eggs from October to May.

The Brahma was generally considered the leading meat breed for the period of time from the mid-1850’s through about 1930 – some 70 plus years.  As a family fowl they were unequaled, and a large Brahma could feed a moderate-sized family.  The breed is easy to contain, not being able to fly low fences very easily. They also stand confinement extremely well – having calm and docile personalities.  The Brahma is an ideal fowl for northern climates. It was popularly known as the least susceptible chicken to cold and exposure – owing this strength to its pea comb and tight feathering with down through all sections.